Thursday 22nd September
Today I had my meeting with the surgeon; I was slightly worried as this decided whether or not the bone had healed, 6 weeks from my surgery.  My CT scan showed that the bone has healed by over 80%, however it is still not fully healed at the very back of it, meaning I can start pool running/swimming and spinning every other day. This is a massive step forward from doing absolutely nothing however I am still not allowed to start walking again for another 2 weeks. Once it is fully healed I can throw away my crutches and burn that ugly moon boot!  I need to start getting mobility back into the ankle joint as at the moment the foot is totally rigid. I absolutely freaked out at any slight movement I made incase I damaged it, but not I have been told I need to start doing slight movements in order to regain the flexibility back. 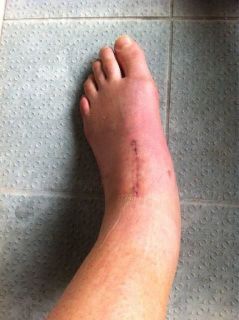 My surgeon Mr Pilau showed me the first scan I had taken and I couldn’t believe the size of the break (obviously scaled bigger on the scan) but it was still a lot bigger than I originally thought). He then went on to say in his own words that, he could imagine ‘this type of injury in a motorcycle accident’ rather than from running and that the ‘bone had splintered in several parts and some of the surrounding bone was like mush’. Due to this they inserted a metal plate around the bone to make it stronger, which I keep in my foot unless it disrupts my training. Yes, he honestly said ‘like mush’ and bone definitely should never be described as ‘mush’! But I have followed everything he has told me to do and thankfully it is on the way to recovery!
The other day I had a little stumble coming out the car, attempting to carry a water bottle, strawberries, heat magazine and a bag. The next day my foot looked like this…  <—
It looks as if the surgeon had removed my foot and put it on the wrong leg. Pretty horrible. It is looking better than ever now though! Mr Pilau told me that the metal plate is casted (originally) from America and so; it has actually changed the shape of my foot into what a normal generic foot should look like. I’ve had a little foot lift. But in all seriousness it is actually looking nicer than my other ugly foot.
I was hoping to be going on the UKA camp to Kenya this year but unfortunately my application has been declined due to my injury! I’m hoping that I will get accepted on the second camp which starts in January, as I really feel being away at altitude would kick start my fitness.

Aside from my injuries etc I have been busy revising for my University exams. It’s killing me, but they have to be done soon within the next 3 weeks. After these are done I have the full year out to concentrate on getting myself back fit and healthy!  My boyfriend has decided to take over my room with some of his belongings, which I am totally fine about apart from this—>
Theeeee biggest poster he could possibly find… of Einstein?! I have no idea, but against my will, it is on the wall!
On another note, I have been asked, as part of a group of athletes, by the Winning Scotland Foundation to take part in their Champions in Schools initiative. I am very excited to be helping out and cant wait to get started! Think my little brother, who has just started high school, is already cringing at the thought that I may appear in front of his class. Apparently it’s not cool for your older sister to do such a thing.
Disadvantage of having a metal plate in my foot: I will beep through the security at an airport ALL the time. Advantages of having a metal plate in my foot: I can kick people and it will probably hurt. I will add to this list when I can think of anymore.
Anyways, not sure there will be much to update until my next meeting with Mr Pilau, who I will start calling God if this all goes to plan.
x