Yesterday I was extremely fortunate to get the opportunity to step inside the Olympic Stadium! I had seen pictures of from when it was still being built a few months ago but it is completely different, actually being there. The stadium is UNBELIEVABLE. As soon as I stepped inside, I wanted to start running around on the track but we weren’t allowed. Although we were allowed to jog very slowly beside Lord Seb Coe for the press photos across the finish line – which was pretty cool. I also got in trouble for taking pics but with it being BUCS Championships this weekend, I knew hundreds of folk would be taking pics then! So I just got in there first 😉

The actual press conference wasn’t really a nice situation to be in. The aim of the day was to publicise the BUCS championships and the athletes competing in the stadium for the first time ever. However, all of the journalists were continuously quizzing Lord Coe about the ‘security of the stadium’, ‘the current weather and how the rain affects the stadium’ and about ‘how necessary are the missiles on the roof’. It was actually an extremely awkward situation and unfortunately not many of the journalists were really bothered about BUCS being the first test event in the new stadium! 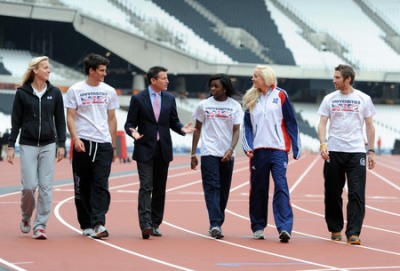 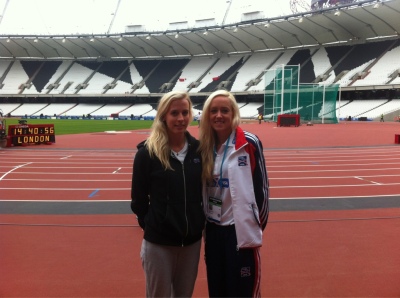 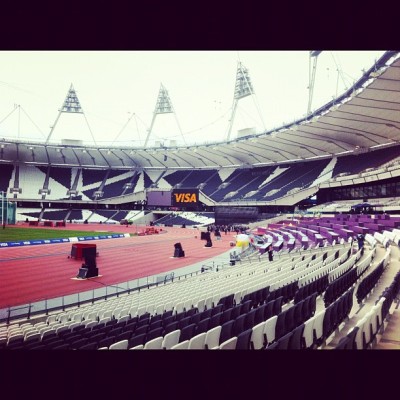 So, BUCS is currently underway but I am yet to move from my bed for the past 6 hours. I really am going to town on my first rest day since I broke my foot last August. It’s not even enjoyable because I am THAT bored. There is only so much eating/sleeping and watching 90210 that you can do before you clinically go insane. Thankfully, I have managed to save some money (intact a LOT of money) by staying at my Howell’s families down in Temple, London. All the hotels were fully booked within, about a 20mile radius to the track! Nightmare. Where I am currently based though, is perfect and I have been doing my easy runs along the main tourists sights of London – which is pretty cool! Although… I attempted to find a track or park near where I was staying but after wandering around for 20minutes I decided to give up and go for my run along the Victoria Embankment. I then attempted to do strides along the path but it was so, so busy that I ended up doing my 8 strides along the main road! Crazy idea as I was very close to getting run over by hundreds of taxi’s and bikes!!
Travelling about London has been really easy on the tubes – although I regret jumping in a taxi the other day. The man went absolutely wild at me because I had a Scottish £10 note. To me, the money is the exact same- I didn’t even realise it. Until he was practically screaming in my face telling me that it could in-fact “be an illegal note… a fake note..” He then went on to say “i’ve never seen this in my life”. Unfortunately, I didn’t have another penny to my name – so either he took my ‘fake monopoly money’ or he was giving me a free ride! Oops.. I have now stocked up on English bank notes to avoid any more fights! Haha.
My race is at 11.50am with my semi-final on Sun and (hopefully) the final on Monday. 3 days of racing will be tough an thats why I have decided to do the 1500m – as it’s the best preparation with regards to the rest of my racing season!
STV have been following me over the past week as they are doing a small documentary on “Scotland’s Olympic Hopefuls” – and I am very grateful that they think I am one! 🙂 They are actually coming all the way down to London to film my races and to follow me over the rest of the season on my quest to make the Olympic Team!
Will write my next post after BUCS with how everything goes and possibly more pics and videos (if i’m allowed!!)