My boyfriend is half Bajan but he had never been to the Caribbean before and either had I. For Michael’s 30th, I surprised him with a trip to his homeland! We had hoped to visit some of his family that remain on the island but unfortunately we failed to meet them after a bad hurricane cut out communications. Nonetheless, we had a brilliant time on the island – combining just the right mix of activities and relaxation! It’s also where my parents went on honeymoon and so I was looking forward to exploring the same country they had, twenty years previously. 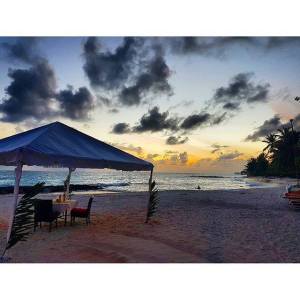 We wanted to fully submerge ourselves into Barbados and decided to spend one week in the south west of the island and the second week at the very north of the island. It gave us the chance to really explore every ounce of what was on offer. I’d say the first hotel was certainly more luxurious than the second but both offered a different vibe. 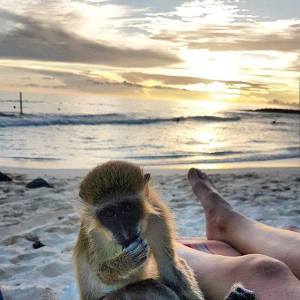 Ocean Two had a great location right on the bottom of St Lawrence Gap, away from the hustle and bustle of the pubs and clubs, overlooking the Caribbean Sea. We had snorkelling equipment and water sports on tap and two beautiful pools, one next to the beach and the other on the rooftop. The food here was delicious too. We thought we would get bored of the food being all inclusive, with only one restaurant but it was a huge regret. The variety on the menu was brilliant and the food was some of the best we had on the island.

Our second week was spent at Sugar Cane Club. This hotel was adult only and further inland than our first hotel. The hotel did offer the chance to use the facilities at a sister hotel which was about ten minute drive away – if you were looking for a day at the beach. It also offered a few complimentary tours which were lovely. We headed out to sea on a glass bottom boat for free. The boat was pretty small, which made us a little nervous to begin with but seeing the fish floating underneath us certainly helped to settle the nerves. 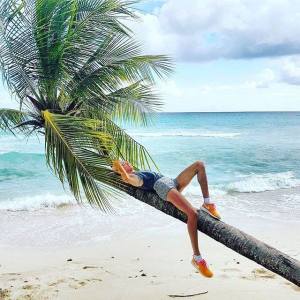 The food in Barbados is truly to die for. We took a trip down to Oistins which is the place to be on a Friday night. The seafood was the best we tasted. Oistins has a great vibe with loads of little spots to eat, markets stalls and some brilliant live music. Hours were spent here and it was a great place to dance the night away. On our first evening, we bumped into another two Olympic track and field athletes! Very surreal!

In our second week, we took a trip up to the most northern point in Barbados, affectionately named Scotland Corner! We visited Animal Flower Cave which was beautiful. A secluded cave with a idillic spot to go swimming.

We went in search of the ‘Pink Sands’ and were pleasantly surprised. Crane Hotel hosts a beautiful secluded beach with sand that is tinted pink when the water hits it. It was certainly worth the bus trip down there. You don’t have to be a guest in order to visit and can access the beach for free at the far side.

There are so many cool things to do on Barbados – you’ll never be bored. In our first week, we took a boat tour with Calabaza.

Swimming with sea turtles was AMAZING and something i’ll never forget. The crew were hilarious, the food was brilliant, the sun was shining – I honestly couldn’t fault it. They also took some unbelievable pictures throughout the tour and sent them all over to us, free of charge. Amazing!

We caught the bus up to Georgetown to explore what the capital of Barbados had to offer. From there, we walked up to the Mount Gay Rum Factory. We were given so many tasters of the rum – and all for just $10! I don’t actually drink but the tour was so interesting and Michael was in his element – getting my portion of rum!

On the same day, we took a Submarine trip with Atlantis Submarine Tours. This was a little costly but it was obviously a very unique experience! To be honest, we preferred the boat tour where we could physically swim along side the fish rather than look at them through a window. You really are paying for the experience of being in a submarine rather than anything else but for young children or older adults that are uncomfortable swimming – this is a great alternative!

My parent’s recommendation, dating back from 1985 was to check out Harrison’s Cave. It was a little surreal going around the same sites they had visited many moons ago!

Harrison’s Cave is a unique phenomenon of nature – an amazing gallery of stalactites hanging from the roof of the cave, and stalagmites that emerge from the ground, with streams of crystal-clear running water that drop from breathtaking waterfalls to form deep emerald pools. Again, we travelled on the local transport to get out there but there are several tour operators who will pick you up.

Not far from Harrison’s Cave was the Barbados Wildlife Reserve. This was definitely somewhere I’d recommend checking out. Large tortoises and iguanas roam around but the main attraction are the wild green monkey’s. They do roam freely and aren’t enclosed within the Reserve but at certain times throughout the day – you can spot hundreds of them! Top tip – Head along around 2pm which is their main feeding time.

There are so many beautiful places to go for an easy jog around Barbados. The Haynes Boardwalk at Accra Beach is about 1.5km long – so not a huge distance but it really is beautiful and very quiet in the mornings. Alongside that, there are loads of grass cricket pitches and school sports grounds to loop around. Take caution if you’re heading out on the roads – the traffic can be a little chaotic! If you’re looking to do something a little more specific – get yourself along to the Barbados National Athletics Stadium in Waterford.

The Run Barbados Marathon weekend is typically held on the first week of December each year. From a fun mile run and pasta party to a 5K, 10K, half marathon and marathon – there really is something to cater for everyone’s needs!

What else is there to explore?